A Route different from the other ones crosses the heart of Piedmont.
A route which connects hills, vineyards, castles, villages and farms, in the sign of taste and beauty: the “Strada del Vino Monferrato”, the “Monferrato Wine Route”. 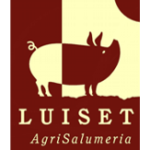 In the “AgriSalumeria Luiset” Farm and Butcher Shop located in the village of Ferrere d’Asti you can find an extraordinary variety of salami and meats processed respecting tradition, quality and genuineness; all the products are made using selected cuts of meat only, light and tasty, adding a delicate mixture of spices, without lactose and gluten.

This important farm was established in the Seventies by the famous Luigi Casetta, nicknamed Gino Luiset, who became very expert in pigs butchering and salami making since when he was young, also inventing new recipes made of wine and special spices. Nowadays his sons Mauro and Chiara continue and renovate his first “trials”, managing the company with him and still working toward the best productive quality.

The pigs farming is the cornerstone of the whole production chain and takes place here in full compliance with animals’ health that can enjoy large corrals out in the open and natural nutritional plans, based on OGM free cereals cultivated in the fields owned by the family largely. Butchering takes place in the rooms next to the farm, preventing the meat transport and guaranteeing the best freshness. The family also made recently an important work of restoration and enlargement of processing rooms, mixing tradition and innovation.

The traditional processing methods guarantees the production of many tasty specialties, such as row cured meats, including aged Coppa and Cheek Lard, Lard, “Luiset Bacon” and “Luiset Row Ham”. You can also find several kinds of row salami, such as “Rustico”, “Luiset Salami” seasoned with Barbaresco or Barolo wines, or with Beer, or with Piemonte Hazelnuts, or with Truffle. At the end you cannot miss the special kinds of cooked salami, such as Cotechino, Hamburgers, Roasted Ham, “Luiset Cooked Ham” and “Monferrato Cooked Salami”.

Thanks to the extraordinary quality of its products, “AgriSalumeria Luiset” butcher shop achieved some important prizes and recognitions, such as the “Prize for the best Monferrato Cooked Salami” in 2014 and “The Best Artisan of Triennium” in 2013, which is a kind of “Oscar” in this field. We cannot forget the “Row Salami Italian Contest” Prize: in 2009 Luiset was able to classify as the unique salami maker from Piedmont among the best five ones in Italy.

“Strada del Vino Monferrato” – “The Monferrato Wine Route” – is a no-profit association established in 2003 and included in the Regional List of the Route Wines of Piedmont since 2005. This association involves farms, producers, wineries, wine shops, restaurants, accommodation facilities, cultural institutions and tourist operators. This Route is divided into four thematic areas in order to make know better and taste the wines, the gastronomy, the nature, the history and the soul of Monferrato: